About the project
2017, Scotland’s year of History, Heritage and Archaeology, sees the start of the Stobs Camp Project proper.  The development phase throughout 2016 has led to many people and organisations expressing support or wanting to be involved from all across the UK and the wider world.

Our enthusiastic management team, which consists of representatives from Hawick Archaeological Society, Hawick Callants Club, Borders Family History Society, Historic Environment Scotland, Live Borders, Borders council archaeology service and the landowners, are all keen to get on with putting Stobs Camp on the worldwide map as one of the most important Home Front sites from the First World War.

What have we done so far?
Walks, talks, digs, metal detecting, finds sorting, researching and surveying are some of the activities we have been up to since the start of 2017.
We plan on more of the same for the rest of the year.  Some dates are firm in the diary and others will be confirmed very soon.

During 2016 we organised or participated in many events to offer different experiences and give a taster of what is to come in the Stobs Camp Project. We held a public meeting in Hawick to inform about the project plans and to recruit new volunteers. It was well attended and one volunteer brought part of his personal collection of memorabilia which is now being digitised and images will be loaded to this website. Along with HES, we ran a workshop on the Home Front Legacy site recording app and then took volunteers on a tour of the site to discuss how Stobs could be recorded. We held training sessions with the Hawick High School researching newspaper archives related to the PoW camp. The children were fascinated to read about the escapees and what life was like for the internees. We also took 60 pupils out to Stobs to learn various archaeological techniques for recording standing buildings and footings. Border Life, a regional ITV production company, followed them around and filmed them for a magazine programme. For helping to find out about their heritage the children all received a Heritage Hero Award.

We are in regular contact with academics undertaking FWW research at Napier, Aston and Liverpool universities and with Manx Heritage on the Isle of Man. Two of the team visited the Isle of Man to compare the work Manx Heritage have done regarding the PoW camps on the island. The largest was Knockaloe, near Peel, which housed ‘alien’ internees moved from Stobs and then thousands of military and naval prisoners too. Nothing remains of the camps at Knockaloe as the land has been returned to arable use. However, the team has made links with the Knockaloe Visitor Centre project whose database of internees is helping to contribute to our knowledge of the civilians that were moved there from Stobs in 1915.

With further ‘taster’ sessions for adults conducted in the autumn including oral reminiscence interviews, vegetation clearance, geophysical survey, metal detecting, family history research, map regression and small-scale excavation we have been overwhelmed by the media attention we have secured, from regular articles in the local press to ITV Border and the Landward programme on BBC Scotland. We are delighted to have a pool of over 120 volunteers from all over the UK. There has also been interest in the project in Germany. Throughout the development phase of the project volunteers have contributed over 575 hours of their own time which have been invaluable in helping the project gain momentum. 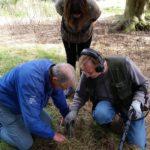 Volunteers metal-detecting in the former cemetery 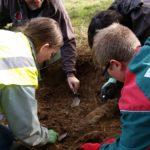 Volunteers digging in the former cemetery 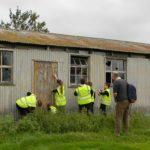